Why we started WillU FX

Craig Copeland and Will Stevens co-founded WillU FX out of frustration due to the problems they as drivers, their families and sponsors experienced when sending payments to their European counterparts.

It wasn’t until later in their careers, that they realized how much money per season was being thrown away when making payments to race teams, circuits, and for travel.
Importantly now, when Will gets paid by teams and motorsport related jobs in foreign currencies, he receives a higher payment amount than when he would previously process through his bank.

What WillU FX are now doing is using Craig’s and Will’s experience and expertise to help and educate young drivers, to try and stop this problem early.
For example a UK based driver racing overseas, and overseas driver racing in the UK, we can help them get more out of their budget for the year, potentially providing savings that may help pay for accident damage, travel or an extra test day.

As an example, sending £100,000 using your bank to pay a race team in Europe could cost you between £3,000 to £5,000, whereas we can offer a rate a lot closer to the spot exchange rate of the moment.
In addition we can also guide on market timing, when to make those payments, booking forwards ( hedging ) to maintain your budget over the year.

We are also working very closely with professional race teams in a similar way, who’s costs with running multiple cars would be significantly higher, increasing their levels of exposure and risk.

As a business our aim is to help younger drivers as well as paid professional drivers to receive more currency from the Euros or Dollars they’re paid in or vice versa, sending a lower amount in pounds sterling.
We are here to help and service the motorsport industry, the teams, the drivers, the sponsors and other associated businesses, spend and use their hard earned money more effectively and at a lower cost.

WillU go racing with us? 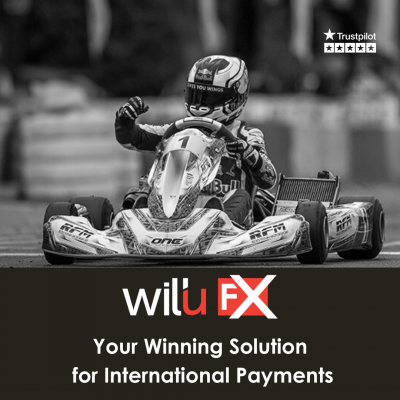 🤩Save on family days out with #WillUWorld 📲G